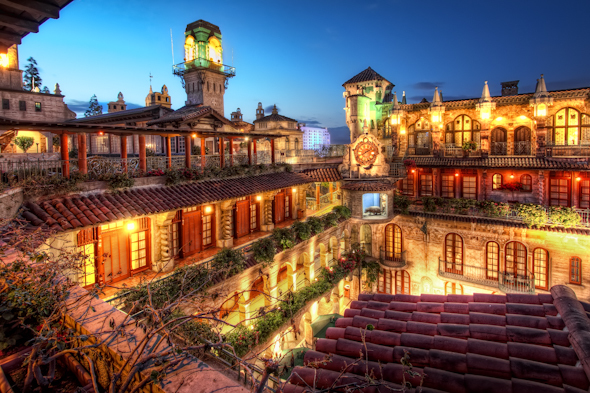 The Mission Inn began as a twelve-room adobe boarding house built in 1876 by the Miller family formerly from Tomah, Wisconsin. Under the leadership of eldest son Frank Augustus Miller, the boarding house, originally named the Glenwood Hotel, morphed into a grand destination hotel. The hotel would become an integral part of Riverside’s identity. FROM 1903 to 1931, Miller built, honed, and perfected his hotel, making it feel like a home to weary travelers and a never-before-seen exotic locale. In constructing the various wings and additions, Miller used a combination of Mission Revival, Spanish Revival, and Asian architectural elements. He decorated rooms and public spaces with finds from his travels to Europe and Asia.

From hosting famous guests, to helping locate an Army air base nearby (currently known as March Air Reserve Base), to hosting international conferences, Miller was integral to establishing Riverside as an important Southern California cultural center and economic hub. Miller’s contributions made his 1935 death a profound loss for the city and region. After Miller, the Mission Inn passed to his only daughter and son-in-law, Allis and DeWitt Hutchings. The Hutchings operated the Inn through the Depression and World War II and would die within four months of each other in 1952 and 1953. The hotel then passed to their three children, Frank Miller’s grandchildren. Even though they had grown up in the Inn, the grandchildren wanted to pursue other life goals. They sold the inn to hotelier Benjamin Swig, famous for his ownership of San Francisco’s Fairmont Hotel. In keeping with postwar tastes, Swig attempted to modernize the Mission Inn to make it more palatable to tourists who craved the new and contemporary rather than the old and antique. Swig covered up old woodwork, installed shag carpeting, and used decorative colors popular in the 1950s such as turquoise and avocado green.

Not all of Swig’s changes were ill-considered. He installed central air conditioning in the common rooms and window units in the guest rooms. He also converted a residential suite on the first floor just off the lobby into a main bar, the Presidential Lounge. However, it soon became apparent that most of this was superficial decoration. The Mission Inn needed far more maintenance and basic restoration than Ben Swig had realized. And so he tried to sell the historic hotel.

Meanwhile in 1957, to the horror of many in the community, then and now, Swig held an auction of Mission Inn art and artifacts. Swig felt justified because he was losing $20,000 per month. Despite this and other  efforts, the Mission Inn continued to bleed money. In 1967, Swig finely sold the Mission Inn to Goldco, a company headed by H. L. Goldberger. Goldco declared bankruptcy a year later and the doors to the Mission Inn were closed and padlocked. Within a week, a court-appointed receiver reopened the Inn. Swig repossessed it and continued looking for a buyer. These events stimulated the formation of the Friends of the Mission Inn, a concerned community group dedicated to preserving the Inn’s future. In May 1971, the Riverside City Council examined the idea of buying the Inn and actually voted unanimously to make the purchase. It soon abandoned the plan due to the cost of renovation and the City charter’s prohibition from operating or leasing it as a hotel.

All of this activity focused Riverside’s attention on the Inn. People at all levels, who had taken the Inn for granted for years, began to realize that this unique edifice was the centerpiece of the community, and it could be lost. Efforts to “save the Mission Inn” culminated in July 1976 when the City of Riverside’s Redevelopment Agency purchased the Inn from Connecticut General for $2 million. To avoid violating city charter, the City Council created the non-profit Mission Inn Foundation (MIF) to operate the Inn for the city. A formal lease was signed with the city paying insurance and property taxes.

During the late1970’s and early1980’s, the MIF partnered with concerned citizens and groups such as the Junior League and the Friends of the Mission Inn. This civic-minded coalition began raising money to renovate the Inn. Progress was made, but it became apparent that the scope of the renovation was beyond the capacity of the volunteer community. After eight years of city ownership, the hotel was sold to Carley Capital Group (CCG) in 1984, which closed it and began a ground-up restoration. It was at this time that the MIF had to re-envision its purpose. Instead of operating the hotel, the Foundation tasked itself solely with “preserving, interpreting, and promoting” the Mission Inn’s history. CCG did not close the hotel until the last of the scheduled weddings took place the next year. CCG eventually went bankrupt after spending tens of millions of dollars in restoration efforts. Chemical Bank of New York, which held CCG’s loan, spent millions more money to finish the renovation. The beautifully-restored Inn was ready, but the bank could not find a buyer. It remained unsold until 1992 when local businessman and entrepreneur Duane Roberts purchased the hotel for $15.6 million. The purchase included the land, the fully restored hotel, and everything in it.

Despite the “bad old days,” today’s Mission Inn Hotel & Spa is once again a hotel worthy of its National Historic Landmark designation. The hotel remains the center of Riverside’s social and cultural activities, much as it did in the days when Frank Miller and his family opened the doors, greeted their guests, and invited them in for a unique experience.